Harvard professor of symbology Robert Langdon awakens in an Italian hospital, disoriented and with no recollection of the past thirty-six hours, including the origin of the macabre object hidden in his belongings. With a relentless female assassin trailing them through Florence, he and his resourceful doctor, Sienna Brooks, are forced to flee. Embarking on a harrowing journey, they must unravel a series of codes, which are the work of a brilliant scientist whose obsession with the end of the world is matched only by his passion for one of the most influential masterpieces ever written, Dante Alighieri’s The Inferno.

Dan Brown has raised the bar yet again, combining classical Italian art, history, and literature with cutting-edge science in this sumptuously entertaining thriller.

Explore the sights of Inferno alongside Robert Langdon in this exclusive first look at Dan Brown’s latest thriller. 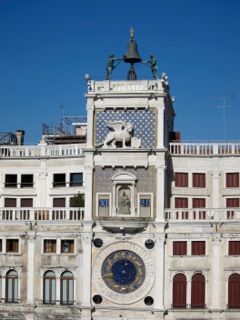 As Langdon continued on toward the elbow of the square, he could
see, directly ahead in the distance, the shimmering blue glass dial of the
St. Mark’s Clock Tower—the same astronomical clock through which
James Bond had thrown a villain in the film Moonraker. 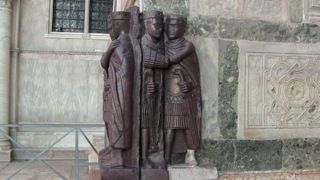 The Tetrarchs statue was well known for its missing foot, broken
off while it was being plundered from Constantinople in the thirteenth
century. Miraculously, in the 1960s, the foot was unearthed in Istanbul.
Venice petitioned for the missing piece of statue, but the Turkish authorities
replied with a simple message: You stole the statue—we’re keeping our
foot. 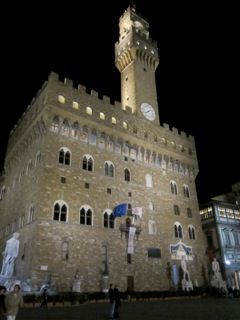 Amid a contour of spires and domes, a single illuminated facade dominated
Langdon’s field of view. The building was an imposing stone fortress
with a notched parapet and a three-hundred-foot tower that swelled
near the top, bulging outward into a massive machicolated battlement. 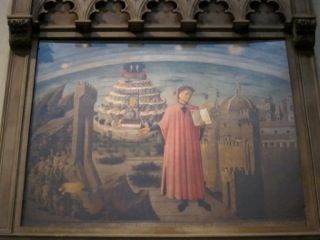 Langdon found himself standing before a familiar face—that of Dante Alighieri.
Depicted in the legendary fresco by Michelino, the great poet stood before
Mount Purgatory and held forth in his hands, as if in humble offering,
his masterpiece The Divine Comedy. 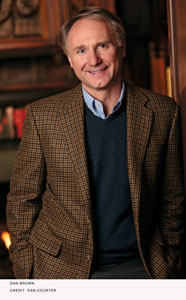 Q. Inferno refers to Dante Alighieri´s The Divine Comedy. What is Dante’s significance? What features of his work or life inspired you?

A. The Divine Comedy—like The Mona Lisa—is one of those rare artistic achievements that transcends its moment in history and becomes an enduring cultural touchstone. Like Beethoven’s Ninth Symphony, The Divine Comedy speaks to us centuries after its creation and is considered an example of one of the finest works ever produced in its artistic field. For me, the most captivating quality of Dante Alighieri is his staggering influence on culture, religion, history, and the arts. In addition to codifying the early Christian vision of Hell, Dante’s work has inspired some of history’s greatest luminaries—Longfellow, Chaucer, Borges, Tchaikovsky, Liszt, Monteverdi, Michelangelo, Blake, Dalí—and even a few modern video game designers. Despite Dante’s enduring influence on the arts, however, most of us today have only a vague notion of what his work actually says—both literally and symbolically (which, of course, is of great interest to Robert Langdon). A few years ago, I became very excited about the prospect of writing a contemporary thriller that incorporated the philosophy, history, and text of Dante’s timeless descent into The Inferno.

Q. Where did do your research for Inferno? How long did you spend on it?

A. Researching Inferno began with six months of reading, including several translations of The Divine Comedy, various annotations by Dante scholars, historical texts about Dante’s life and philosophies, as well as a lot of background reading on Florence itself. At the same time, I was poring over all the new scientific information that I could find on a cutting edge technology that I had decided to incorporate into the novel. Once I had enough understanding of these topics to proceed, I traveled to Florence and Venice, where I was fortunate to meet with some wonderful art historians, librarians, and other scholars who helped me enormously.

Once this initial phase of research was complete, I began outlining and writing the novel. As is always the case, when a book begins to take shape, I am drawn in unexpected directions that require additional research. This was also the case with Inferno, which took about 3 years from conception to publication.

With respect to the process, the success of these novels has been a bit of a Catch-22. On one hand, I now have wonderful access to specialists, authorities, and even secret archives from which to draw information and inspiration. On the other hand, because there is increased speculation about my works in progress, I need to be increasingly discreet about the places I go and the specialists with whom I speak. Even so, there is one aspect of my research that will never change—making personal visits to the locations about which I’m writing. When it comes to capturing the feel of a novel’s setting, I find there is no substitute for being there in the flesh…even if sometimes I need to do it incognito.

Q. What kind of adventure will Robert Langdon face this time? Can you give us any sneak peak at the new novel?

A. Inferno is very much a Robert Langdon thriller. It’s filled with codes, symbols, art, and the exotic locations that my readers love to explore. In this novel, Dante Alighieri’s ancient literary masterpiece—The Divine Comedy—becomes a catalyst that inspires a macabre genius to unleash a scientific creation of enormous destructive potential. Robert Langdon must battle this dark adversary by deciphering a Dante-related riddle, which leads him to Florence, where he finds himself in a desperate race through a landscape of classical art, secret passageways, and futuristic technology.

Q. What made Florence the ideal location for Inferno?

A. No city on earth is more closely tied to Dante Alighieri. Dante grew up in Florence, fell in love in Florence, and began writing in Florence. Later in life, when he was exiled for political reasons, the longing he felt for his beloved Florence became a catalyst for The Divine Comedy. Through his enduring poem, Dante enjoyed the “last word” over his political enemies, banishing them to various rings of Inferno where they suffered terrible tortures.

Spark Joy: An Illustrated Master Class on the Art of Organizing and Tidying Up

WishlistWishlist
Back to Top